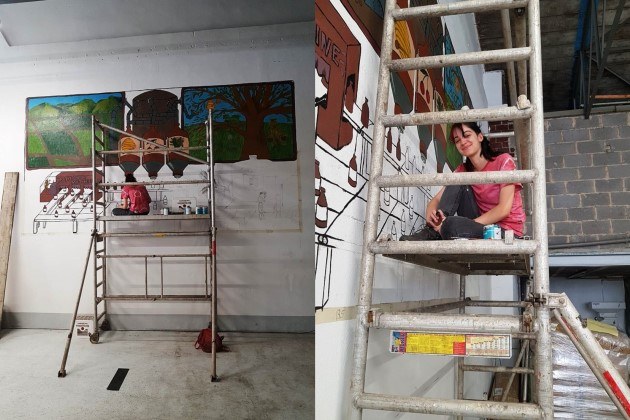 As a starting picture of this page our mascot called "Grutie" is welcoming you together with his assistand, "Lu Pulin" the Hopdragon. Here we are with their story. Grutie and Lu Pulin were created by Maja Fohr, daughter of Dr. Markus Fohr. The picture shows her when doing a wall painting at Lahnsteiner Brewery showing historical beers like cherry beer, honey beer and - of course - gruitbeer.

From Celtic legends we know Ceridwen as the goddess of barley, death and inspiration (or maybe „insbeeration“). To reach this insbeeration she brewed a very special potion in a large vessel. In fact and according to the ingredients of this potion Ceridwen brewed gruitbeer. We know she was using barley, mandrake, tollkorn and others. The result was a psychoactive beer causing states of intoxication.
Ceridwens sister in Roman mythology, Ceres, is famous as goddess of cereals. From her name romans derived their word for beer. They called it „cerevisia“.

But - most legends from Celts, Romans or Teutons miss a very interesting detail. Of course goddesses prefer to shine in the light of legends, myths and fairytales, but they don´t like to share everydays hard work. So to brew their legendary potions and gruitbeers they had help to prepare their vessels, water, yeast, malt – and gruit. Their assistant to care about the gruit, to collect, dry and mix it was called „Grutie“. And on the other hand also Grutie had an assistant, the hopdragon called „Lu Pulin“. Lu Pulin had a very high sensitivity for herbs and spices and their flavour. So when Grutie was walking around to collect them, Lu Pulin had already taken off to look out. When the Hopdragon was fluying a hard turn and landing, Grutie knew where to find best gruit ingredients.

In modern times, when people forgot their old myths, they also forgot Grutie and Lu Pulin. But they are still there, hidden somewhere in the background, and leading your insbeeration while brewing the best gruitbeer ever – your one.
next news >> << back to overview