The information about Gruitbeer on this page is a summary of Dr. Markus Fohr´s master thesis at the Institute of Masters of Beer. You can download the full version here – sorry up to now in German only.
Maybe the most beautiful point in brewing beer in common and in brewing Gruit Beer in special we can discover in antiquity, in the middle ages as well as in modern times on all continents. It´s the never ending wealth of nature in spices, herbs, sprouts, seedings or barks and the never ending creativity of brewers to make use of it as well.
This master thesis´ aim was to give a survey over Gruitbeers in history as well as in our times in the whole world. According to this it became necessary to define Gruitbeer:

Gruitbeer contains as replacement or as addition to hops minimum one spicing component of natural plant-based origin like herbs or spices. 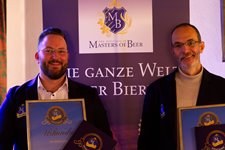 Markus Ernst (left) and Dr. Markus Fohr (right) at Doemens Academy, Gräfelfing near Munich, Germany, in November 2019 when they became Members of the Institute of Masters of Beer

The term Gruitbeer origins in Northern Europe. But beers fulfilling this definition were found on all continents. Instead of the term Gruitbeer often terms like Spiced Beer, Herbal Beer or Healing Beer can be found in history.
In origin Gruit meant pasted cereals, soup of cereals or milled cereals in northern europe´s languages. Gruit was originally used like a malt extract also containing microorganisems to prepare wort and to start fermentation. Herbs or spices were no determining ingredients. Later on the term Gruit Beer turned to the definition mentioned above.

Herbs, spices and all the other ingredients like spruce used to produce Gruitbeer have been really different in historical period and place. Basically this turned out because people were forced to use ingredients they had available. Today variety is a result of the aim to rebuilt historical recipes on the one hand and the aim just tob e creative on the other hand.

Besides herbs and spices it´s proven that many other ingredients like resin, fruits, special malts, concentrated wort or fermented chaff have been in use to produce Gruitbeers. The ingredients mentioned last do not match our modern defintion of Gruitbeers. Modern brewers use these ingredients as well, but they don´t regard it as a part of Gruit. They regard it just as different ingredients to influence the beer´s colour and Aroma.
Here we are with the favourite herbs and spices of historical Gruitbeer (in brackets you find the german terms): 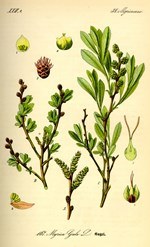 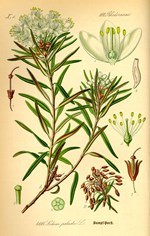 Porse - both pictures by Wikimedia Commons

All these ingredients except porse you can find in modern Gruitbeer too. Hops did not count to the ingredients mostly used as Gruit, but a lot of references proove it to have been used as well. Also in our times there are examples of Gruitbeer with and without use of hops.

To summarize we see one main difference between historical and modern Gruit. The modern one is just used to gain aroma. The historical one was also used to support producing wort and to start fermentation.
Considering the moment to add Gruit we find the same possibilities in history and today. Gruit may be added during wort boiling, during fermentation or maturation. It is and was also possible to combine these techniques.
In Germany, Netherlands and Belgium beer, gruit and hops were and are also important instruments of political, economical and financial power. In many regions political or clerical authorities gained a lot of their income by Gruit rights, the right to produce and sell Gruit. When hopped beers were coming up these Gruit rights vanished – but the authorities kept their influence by new rights and laws like German Reinheitsgebot or modern beer and alcohol tax.

Until 13th century hops have been just one out of many possibilities to flavour beer. From this time on hops went on to be the one and only possibility. But Gruitbeer did not vanish over night. Many references prove their existance in Northern Europe as well as in Germany. Even there it lasted until June 3rd 1906 when brewers in whole German Reich were forced by law to follow the Reinheitsgebot and brew just with water, malt, hops and yeast.

According to current German law it´s possible to brew Gruitbeer with Gruit as „special Beer“ (besonderes Bier) if you have a special permission of the local food authority. The Gruit needs to contain hops as well, otherwise you need to declare not as beer but as „alcoholic beverage“ or as „beverage similar to beer“. Only if you are located in Bavaria there will be no special permission. To comment this situation is not aim of this webpage or master thesis.

Fortunately this situation is just present in Germany. In other countries like Belgium Gruit and Gruit Beer didn´t vanish at all over the centuries. They went on living in styles like Witbeer, Saison or Ale, sometimes also Tripel or Biere de Garde. Even in Africa there are some examples of Gruit Beer.

And we find another analogy between Gruitbeer and many styles like India Pale Ale or Porter. They have been forgotton in their home countries and all over the world – until craft beer brewers came and rewakened them to new life – and new varieties!

To finish these lines we absolutely don´t have to forget a citation of the founder of International Gruit Day, Steve Beauchesne from Beau’s Brewing: 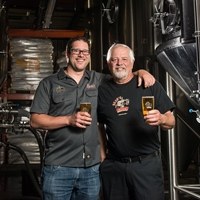 Tim (left) with his father Steve Beauchesne (right), who founded International Gruitday in 2013 at Beau´s Brewing - picture by www.beaus.ca

To finish in final:

In 1667 a young man at the small town of Ransbach in Westerwald region, Germany, got his right to brew beer. In his region it was still part of the Gruitbeer age so we can guess that he really brewed it. The young man´s name was Jacob Fohr. He was the grandfather in 10th generation of Dr. Markus Fohr of today´s Lahnsteiner Brauerei. Nice to meet you! 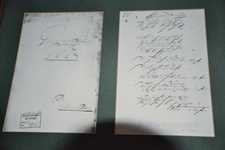